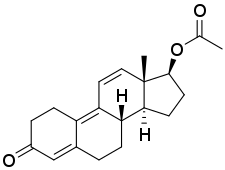 Trenbolone acetate is a steroid hormone developed for veterinary use. Although intended for cattle, it has been taken by humans and been used by athletes and bodybuilders. There are contraindications for both cows and humans as well as a variety of side effects for humans. It is illegal in the United States for anything other than veterinary use.

Trenbolone acetate is administered via a special gun that injects pellets of trenbolone underneath the cow’s skin. It is injected shortly before slaughter to decrease the loss of muscle and weight during transportation to slaughterhouses.

Trenbolone is used by bodybuilders seeking to gain lean muscle mass. Because it shows high affinity for the androgen receptors, it produces quick muscle gains with little additional water retention. It also stimulates the appetite while reducing body fat and decreasing catabolism (muscle loss) even while dieting. Users have reported increased strength gains as well. Bodybuilding dosages range from 75 to 100 mg daily.